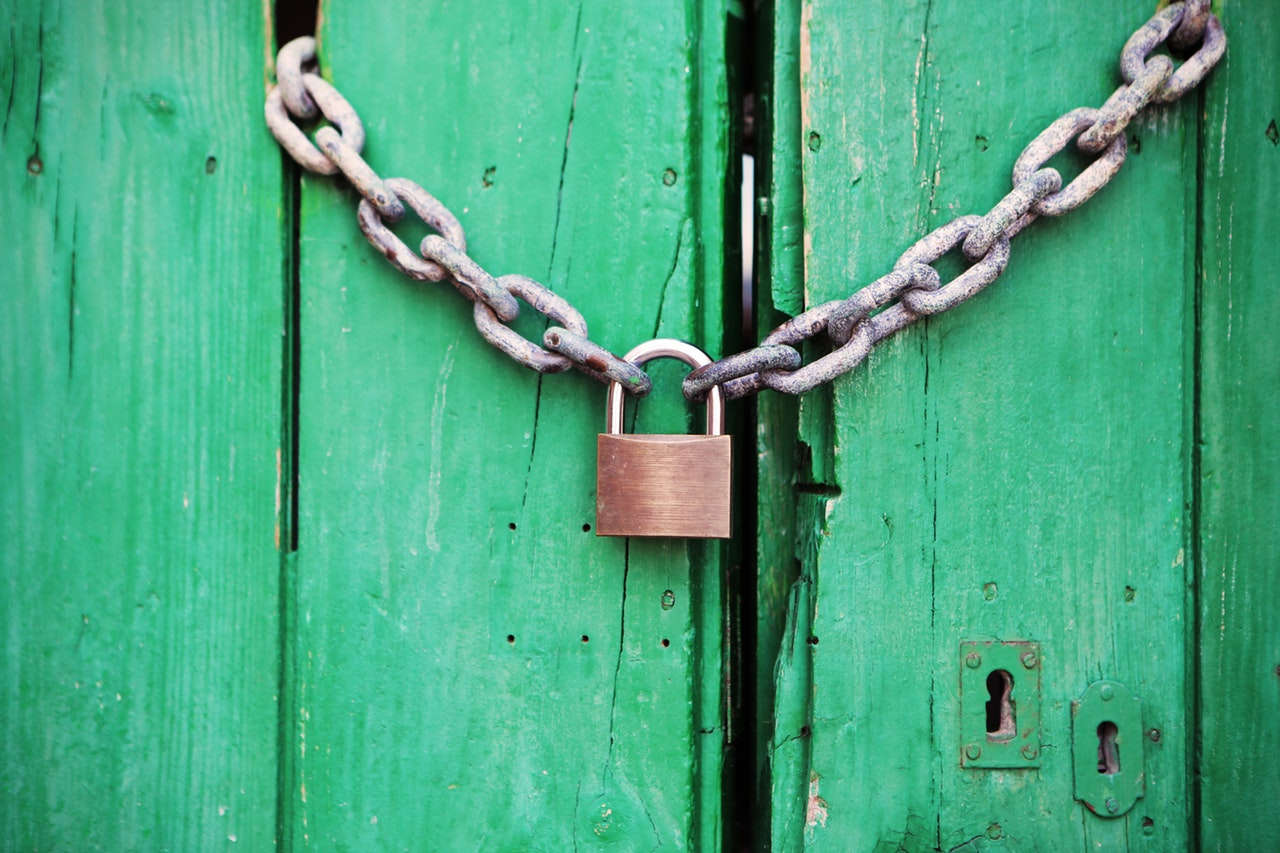 Information security is one of the most importart concerns facing an increasily connected world. And since APIs are the glue of the digital landscape, API security is more important than ever.

In this scenario, user identity and access management are core concepts to deal with. In API architectures, in particular with the emerging microservices approach, the real challenge is to enable a strong security and identity management support while keeping efficiency and reliability.

What we need here is a solution that allows reliable user identity management and authorization checking without additional overhead, and using the JSON Web Tokens (JWT for short) can be the answer.

Quoting from the jwt.io introduction, a JWT can be defined as follows:

JSON Web Token (JWT) is an open standard (RFC 7519) that defines a compact and self-contained way for securely transmitting information between parties as a JSON object. This information can be verified and trusted because it is digitally signed. JWTs can be signed using a secret (with the HMAC algorithm) or a public/private key pair using RSA.

In a world where service-to-service communication security is a real concern, using a JSON Web Token offers many advantages:

I'll take the simple API application example of my previous article, Spring Boot, Jersey, and Swagger: Always Happy Together, as a starting point to show you how to use the Holon Platform to secure API operations using JWT. The Holon Platform JWT support relies on the jjwt library to encode, decode and verify the JWT tokens.

In a typical scenario, the JSON Web Tokens emission, interchange and consumption process involves at least three actors: the issuer, the protected resource and the client.

The issuer is in charge to issue a JSON Web Token as a response to a valid authentication request. This step can include the user account credentials validation.

The produced JSON Web Token can contain detailed user information, including for example user profile information and authorizations, in addition to system and validation related data, such as the issuer name and the expiration time. These information are called claims in the JWT terminology, and they constitute the JWT payload. In addition to the set of reserved claims, you can provide a number of custom claims to represent the user identity and account information.

The issuer role can be easily intepreted by a OAuth2 UAA (User Account and Authentication) server, which returns a JWT instead of an opaque and randomly generated token.

To build a JSON Web Token from an Authentication, the JwtTokenBuilder class can be used. This builder will translate the Authentication permissions and parameters into JWT claims.

The JWT token builder needs to know which kind of token to build (signed or not), which algorithm has to be used to sign the token and any additional reserved claim (such as the token unique id, the issuer name and the expiration time) to add to the token itself before encoding it. This information can be collected and provided to the builder using the JwtConfiguration interface and the Holon Platform Spring Boot support can be used to build a JwtConfiguration using the application configuration properties.

To enable the Holon Platform JWT support, we just have to add the holon-auth-jwt artifact dependency to the dependecies section of our project's pom:

In this example, we want to setup the issuer name to be used, the expiration time and the signature algorithm to use. For the sake of simplicity, in this example we'll use a symmetric signing algorithm (HMAC with SHA-256), so we only need a single secret key, which has to be shared between the parties.

The expire-hours property is used to specify an expiration time of one hour, but other configuration properties are available to use a different unit of time (for example expire-minutes, expire-seconds, expire-ms).

From now on, we can simply obtain the JwtConfiguration which represents these configuration properties as an injected dependency.

So, let's see an example about a JSON Web Token generation from an Authentication object (you can find more examples in the ApiTest unit test class of the source repository):

The JWT produced in the example above will look like this:

This token can be easily transmitted using the HTTP protocol, using for example an Authorization header.

See this example for a simple JWT authorization server which issues JSON Web Tokens as the response of a POST invocation providing username and password using the HTTP Basic scheme authorization header.

Now it's time to protected our API operations using JWT.

We'll use HTTP Authorization header with the Bearer scheme to obtain the JWT provided by the client. The JSON Web Token will be validated according to the JWT configuration properties (checking the sign, the issuer name and the expiration time), then the JWT claims can be used to obtain the required user identity information.

We want to implement a simple authorization control too, so the permission claims will be used to obtain the user roles and check if it was granted to access an API operation.

First of all, we have to setup the Holon Platform security Realm, specifying:

The Realm is configured as a Spring component in the Application class and will be automatically located and used by the Holon Platform authorization and authentication architecture:

The JwtConfiguration bean is automatically created using the application confguration properties as seen before.

Finally, we enable the API endpoint protection simply by using the Holon Platform @Authenticate annotation on the JAX-RS resource class:

For example, to declare that no role is required to access the original /ping operation, the @PermitAll annotation can be used:

The ROLE2 authorization is required to access the following API operation, and the JAX-RS SecurityContext is used (injected through the standard JAX-RS @Context annotation) to obtain the authenticated principal name:

Finally, we add an API operation which uses the Authentication obtained from the JAX-RS SecurityContext to read the custom JWT claims ("firstName", "lastName", "email") and the Holon Platform Realm for additional authorization control. The example response is the JSON representation of a UserDetails example class:

The last actor is the client, which obtains the JSON Web Token from the issuer and uses it to perform the API calls, providing it as HTTP Authorization header Bearer token.

In a service-to-service communication scenario, the JWT obtained from the original API request can be passed around to perform additional inter-service calls. No additional overhead, such as querying the database, is needed to obtain the identity information, which is encapsulated in the JWT payload.

See the ApiTest class to learn how to use the Holon Platform RestClient to perform RESTful API invocations providing the JWT as Authorization header Bearer token.

In the previous post, we've seen how to use the Holon Platform Swagger support to create and provide a standard API documentation. Now we want to complete the API documentation, adding the authorization information. Swagger specification version 3 will be used in this example.

Let's suppose to use OAuth2 to obtain the JWT bearer token. In this example, the OAuth2 authorization server is available at the https://example.org/api/oauth2 URL.

Our authorization example roles (ROLE1 and ROLE2) will be represented as OAuth2 scopes.

Thanks to the Holon platform Swagger auto-configuration, the API documentation can be obtained in JSON format from the URL:

Using the Swagger Editor to display the API documentation, it will appear like this: 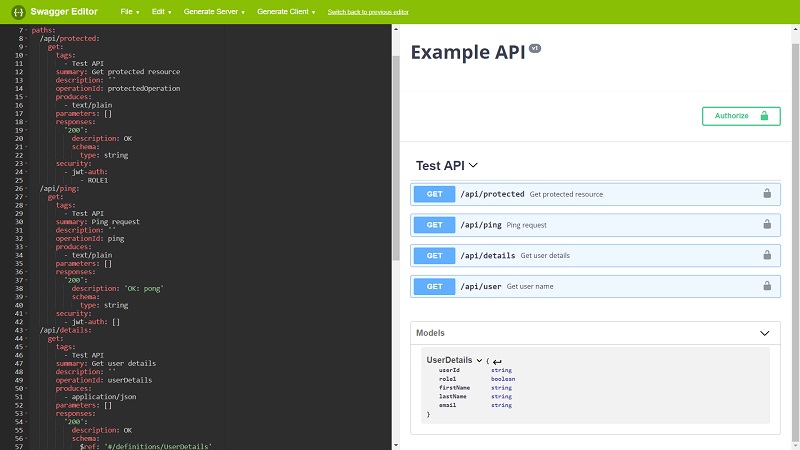 The API authorization scheme can be inspected clicking on the lock icons, for example:

We've seen how JWT can be a lightweight and versatile alternative to other traditional authentication systems, mostly in the stateless API and microservices world, and how the Holon Platform can make its implementation simple and reliable.

See the previous post to learn how to create the API example application using Spring Boot, Jersey and the Holon Platform JAX-RS module.